Only Love is Real * Perspective 3 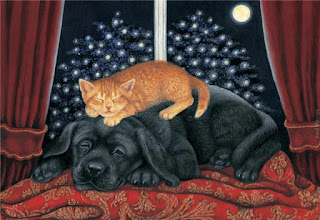 Jacob loved that his walk was so silent. As a matter of fact he considered it a super power. He could enter a room undetected like a spy, unlike Sally who’s paws slipped all over the place. Even more ridiculous, her tongue was always hanging out. Yet she was always good for a laugh and you had to admire that nose of hers.
Something odd was going on. They both could smell it in the air. Changes that made their ears twitch.
Jacob jumped on the top shelf above the cook books and watched Adam put his dish away. It was odd to have Adam home at this time of day, he was usually at the shop, normally Jacob only got to spend an hour or so with him in the evening. Today was a luxury. A soft purr vibrated through him at the realization that home felt like home today. As soon as Adam went to rest on the couch, Jacob planned to warm that chest of his, until he felt the soothing and steady rhythm return to Adam’s breath. Yes, he would do that, if Adam ever stopped washing his hands.
*
Sally whined. A soft whistle. Adam dried his hands and turned towards Sally, “Ok girl. Lets go pee” Sally didn’t really need to pee, but she thought Adam could use a walk. He seemed so restless and trapped. She would show him the night sky and stars. Maybe she could teach him to smell spring under the melting snow. She would run in circles to make him laugh. She loved it when he laughed. It reminded her of a sneeze. Then she would give him a stick to throw. He needed to move, something inside of Adam needed to move. Sally spun in circles around Adams legs as he tried to put her collar on. “Come on Sally! Stay still”
Sally paused and sniffed the air. Yes, something inside of Adam needed to move and heal.
On the window ledge Jacob watched Adam and Sally walk away into the night. Each keeping pace with the other. The light surrounding them becoming one.
Jacob hopped down and made his way to the couch, he would wait there until they returned. He knew Adam would go to wash his hands again. It was new, this constant hand washing, and took more time than usual.
Jacob approved.
He practiced his most silent pounce, landing on the couch with grace. He lifted his paw and began his own cleaning, a long leisurely process he thoroughly enjoyed.

Image: Avril Haynes
Posted by Lucy at 11:38 PM No comments:

Only Love Is Real * Perspective 2 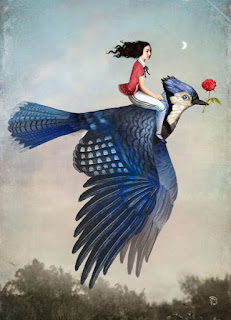 Her closet was jam packed with clothes to make an impact. She had worked hard on this closet. Who she was, and how she expressed herself was on each hanger and shelf. Elena picked out a dress and held it up to her form and stared into the mirror. This totally sucked. If she couldn’t go out, there seemed to be no point to all these clothes. Bullshit. She was pissed.
In the room next door, she heard her daughter Alina’s small feet padding across the wooden floor. Why was she not in the living room with the rest of the family? She wondered if her daughter was sad too. Damn, she felt at a total loss. How could she explain what was happening to the world? She herself had no idea. She walked to the window, her eyes landing on the old apple tree she climbed in as a child.
“Wasn’t the adult supposed to have the answers?”
In her bedroom, young Alina waited for the sparrow who kept a nest in the tree right by her window.She wanted to tell the bird she would brush her Mom’s hair tonight to cheer her up.
Separated by a wall, woman and child stared out of their windows, one noticing the nest for the first time, the other knew it’s first twig. As each momentarily forgot the world, Mother and daughter began breathing in a synchronized melody of accord, an ancient rhythm written together in the womb of the hearts.
*
If there was one thing Steven always prided himself on, it was his ability to remain in control. And now here he was, having to admit he didn’t know everything, all day long. Shit, couldn’t even use his brisk and efficient handshake during introductions to the new nurses. He was left to make eye contact, which he hated.
Marcus removed his surgical mask , his clothes and turned the shower on full. Steam filled the bathroom as he stepped under the stream of water and shut the stall door.
In the fog of the bathroom mirror, spirit Arthur beheld his son with love, through the glass he could clearly see the water running down Stevens drawn face. ‘Water, please do your best and soothe my son. ‘
Steven almost hiccuped an inhale into the misty cocoon of fog. Damn, he felt so weak when he cried.
Arthur wishes he could tell him everything would be ok, that not knowing would be his greatest teacher of heart. But that would take away from the wisdom.
So he dispersed into the steam, to be inhaled by his son. An offering of love and apology.
*
Above the spirits sighed too, as a narrow path broke in the fog over the earth. It seeped in, like a small vein of life in space. As if an ancient heartbeat was being found. And memories of something long cherished was returning ever so slowly into the oxygen supply below.

*Image: Christian Schloe, Time to fly
Posted by Lucy at 11:35 PM No comments: 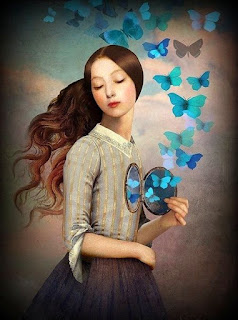 *image: Christian Schloe
Posted by Lucy at 11:30 PM No comments: