Katerina woke, yet kept her eyes closed. She needed to pee. Her sigh held resignation.  She never made it through the night now without needing to pee.  Her eyes opened and she looked towards her front door. She must have fallen asleep in her chair while knitting again. Well, at least it would be easy to get up. Her knees were not what they used to be, years of walking  over cobblestones and mountains had once made her muscles firm, now the bumpy corners of her bones were stiff, swollen and gravely. She thought how she resembled this dry island more with each passing day and smiled at the idea.

The small, dark room still smelled of the herb tea she sipped earlier. An infusion of warm comfort taught to her by her Yaya in this very same house. She inhaled the magic deeply as she leaned forward and with chubby brown fingers braced on the chair’s arms,  pushed herself to standing and moved slowly to the door.

She leaned against the front door and felt the vibration of music, a rhythm that seemed to intensify with each beat, drunken laughter and squeals accompanied the sounds. She lifted the metal latch and opened her door a crack.
In just that small line of open space her house became a part of the disco just down her little lane, colored spinning lights floated into her living room and upon her chair, her knitting needles twinkled. She remembered opening this door as a child, when the moon was bright and the island was silent. In her girlhood she could hear the moon whisper.

There was no choice, she would have to step out in her nightgown. Grabbing her shawl tightly in front of her, Katerina stepped out into her narrow lane, quickly maneuvering herself past the night’s partiers. Imagining herself invisible as she opened the next blue door to relieve herself.
There was a time when this little room down the lane seemed so modern. 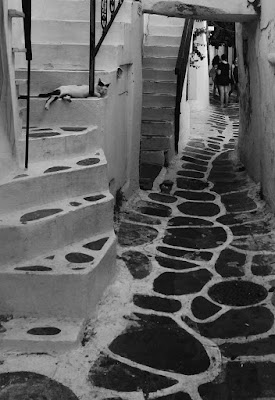 The stones felt the slow rhythm of Katerina’s feet. It had known these feet for many, many years now. Recorded the print of her since the day she was born. It cherished how she once flew through the ally ways and down to the sea on a summers day, her feet slapping hard against warm rocks with a rush of aliveness and roars of laughter. How many nights as a teen had she spent looking up at the sky? Ah, her secret night kisses and embraces. Her grieving goodbyes to loved ones yet open door and arms to strangers. She owned kindness and the island felt humbled to hold her. Yet tonight she felt almost invisible.  The earth and rock comforted itself. Katerina’s essence was forever recorded in the stones and air. Knowing her, she would always be whispering humorous thoughts into the human minds as they lost themselves in the maze of cobbled streets.

Katerina looked quite lovely tonight with her silver hair falling, thought the moon. She was beginning to resemble light. How wonderful. She must be on her way soon. How she would laugh to see Mykonos from here.