Every July and August the ancient island filled with a myriad of tourist in search of glamour and abandonment. (It wondered if they knew how she toned down her beauty at this time of year). Her land turned brown and dry and the sky dimmed its blueness in response. Yet the bright light was ever present, always exposing each crevice and wild curve. Everything somehow looked like a fantasy in Mykonos. A trick from the joker above, though many humans thought it was their doing.
The rock groaned with the added weight, yet held it all with God like strength. The rumble of planes riding across its back. The pounding of music reverberating its cement covered land. Tourists moving along its streets like army ants sensing sweets nearby. Cars screeching, horns beeping in order pass each other in an effort to be first, there always seemed to be a mad rush.


This is what saddened the island, that odd density that filled the air. A thick energy that felt like Hades was nearby.
Yet the island was clever. Every July and August, the island asked the wind to free her of this heaviness, to clean the air and its people.
And the wind came, as friends do.
To wildly tickle the small trees and fields and make the aegean roar with laughter.
On some days the energy on the island was so thick the wind rushed in with force. A wild whipping that shook the shutters and caused the birds to swerve and curse. Yet all knew it was for the best.
The island grinned, and dreamt of September. 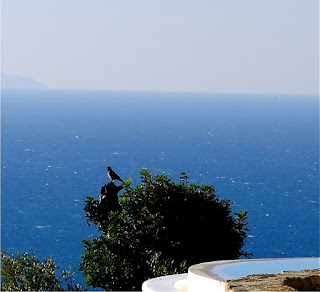